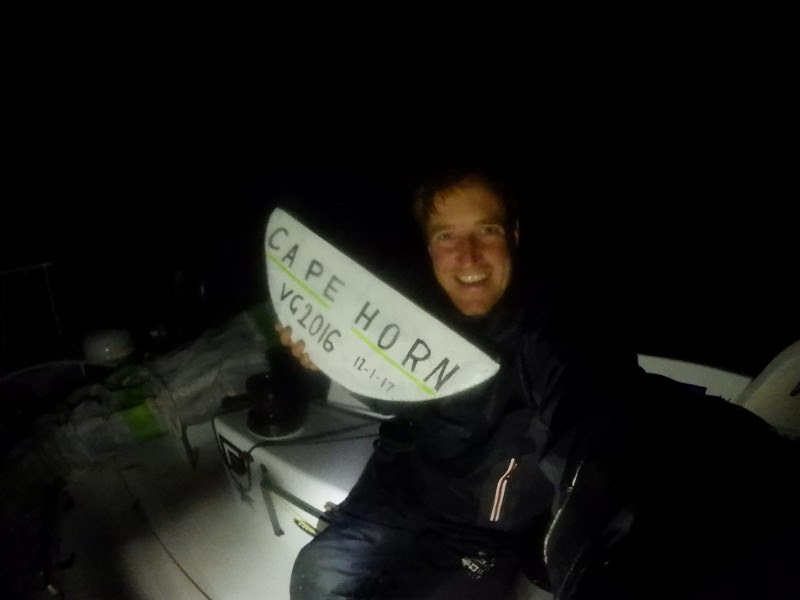 After 66 days, 16 hours and 14 minutes of racing, Foresight Natural Energy passed Cape Horn. Having already been around the world twice, it was not an entirely new experience for Conrad however this was the first time solo. After a tough Pacific crossing, it was a great relief « After my misadventures in the Southern Ocean I'm disappointed I can't push as hard and be as competitive as I would like but but it puts things in perspective. I was a hair's breadth away from going home early on a cargo ship, so I am just happy to still be moving under my own steam." Conrad is having a calm passage (for once!!) in the Atlantic with around 20 knots of wind in an area known for its storms.

Sails!
You've heard a lot about sails so far. Due to crashes with the autopilot and the drama with the forestay he's down a Code 3, J2 and J1 but what are these sails and what does it mean for the rest of the race to have them out of order?

The beautiful big spinnaker is the round white sail that looks so good in the drone photos and is used for sailing downwind, the smaller, flatter sails are called jibs (J1,J2,J3) and the reaching sails, variously called gennakers or Code sails, are used when reaching with the wind on the side of the boat.

The J2 sail is used in medium conditions upwind (the kind he's sailing in now) and for heavy reaching. As there is a lot of upwind for the rest of the race, he'll have to change between his light upwind sail (the Code zero) and the J3, the heavy upwind sail but there's a big difference in size between these sails for a lot of the rest of the race one will be too big and the other too small! As he puts it « Imagine trying to drive a car with only the first, fourth and fifth gears and you'll understand the problem! »

Onwards to the North
Sailors unanimously say that turning Cape Horn is a great moral boost. There are lots of reasons, including rising temperatures, the boat heading towards « home » and if all goes well the last month at sea! The only thing they don't look forward to? Bashing upwind, as the boat bangs on waves, speeds are lower and it is a lot less fun than the last few weeks of surfing on long swells. Conrad is currently going upwind along the Brazilian coast and in condition set to last for a while until he can enjoy better conditions again!