One tack holds the key to Vendée Globe glory 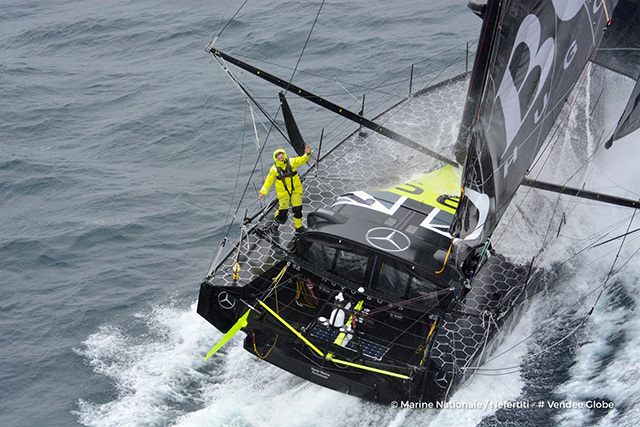 With around 40-nautical miles separating leader Armel Le Cléac'h from Alex Thomson, victory in the Vendée Globe is coming down to one last tack

As of 0900 UTC, there are just 40.13 nautical miles between Vendée Globe leader Armel Le Cléac'h and British skipper Alex Thomson.

The fight to the finish is now coming down to one last crucial manoeuvre.

An anticyclone means that both Le Cléac'h and Thomson are being forced to sail much further north than the latitude of the finish line in Les Sables d'Olonne, France.

This high pressure system is expected to move north-east later over the south of England, allowing both skippers to tack and head towards the finish; the crucial decision for both Le Cléac'h and Thomson will be deciding the right time to make the manoeuvre.

The duo were this morning in decreasing south-easterly winds of 10-12 knots sailing at the latitude of Brest in Brittany.

But as they get nearer to the coast the wind is forecast to gradually swing to the north-east and at this moment they will be able to tack onto port and begin the final sprint.

The home strait is marked with pitfalls – the islands of Groix, Belle-Île and Yeu will disturb the breeze, the currents in the area are known to be tricky and the coastline is busy with shipping and fishing traffic.

It may just be that these obstacles give Hugo Boss skipper Thomson the opportunity he needs to usurp Le Cléac'h and Banque Populaire VIII from the top spot in the final 36 hours of the race.

At 0400 UTC it was Le Cléac'h, runner-up in the last two editions of the Vendée Globe, who had the speed advantage, making just shy of 15 knots compared to Thomson's 10.

Both boats are set to arrive in Les Sables on Thursday.

Jérémie Beyou in third, some 800 nautical miles behind, is likely to finish around two and a half days behind Thomson and Le Cléac'h thanks to a relatively stress free final 1,000 nautical miles.

The same can't be said for fourth-placed Jean-Pierre Dick, who has a fight on his hands to defend his position from Yann Eliès and Jean Le Cam.

Dick faces having to cross a windless patch almost 200nm wide before sailing west of the Azores to lock into an Atlantic depression, providing his chasers with an opportunity to completely wipe out the 60nm that currently lie between them.