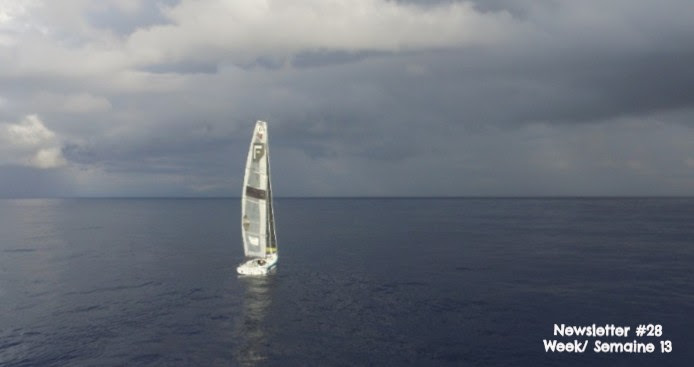 After a few tough days sailing North really fast on choppy seas, Conrad has entered a transition phase in the weather system. The calmer conditions are allowing him to rest and check everything on the boat before heading to the finish line. The « train » to Vendée will arrive very soon, with a very active low pressure system that will carry Foresight Natural Energy close to the French coast. The end of the race remains uncertain with a meteo forecast that keeps changing a lot.

If you're not yet familiar with « ETAs », let me inform you as you will hear a lot about them in the next few days! They are simply an Estimated Time of Arrival. One sure thing: they give a pretty good estimate and allow people to get organized a bit, but nothing is certain before the boat crosses the finish line. Aeolus remains the specialist of last minute surprises, his favourite activity being to play with skippers' nerves! One could think that after 3 months at sea, a few days or hours does not make a big difference, but it does. When sailors picture the arrival and being with their friends and families, time starts going by really slowly!

For the lucky and motivated ones who will be coming to the arrival, a few practical details: for now, Conrad's ETA is for Monday February 13th. In the French city of Les Sables d'Olonne, tides dictate the possible entries into the harbor making things a bit trickier. If Conrad arrives next Monday, he will be able to enter the harbor either before 9.30am or between 3.30pm and 9.30pm. Depending on when Conrad crosses the finish line, we'll keep you updated on when he goes down the channel. Access to the docks will be limited, but Conrad will stop by the podium before going to the interview so come see him! Last minute info will be posted on Facebook page and Twitter.