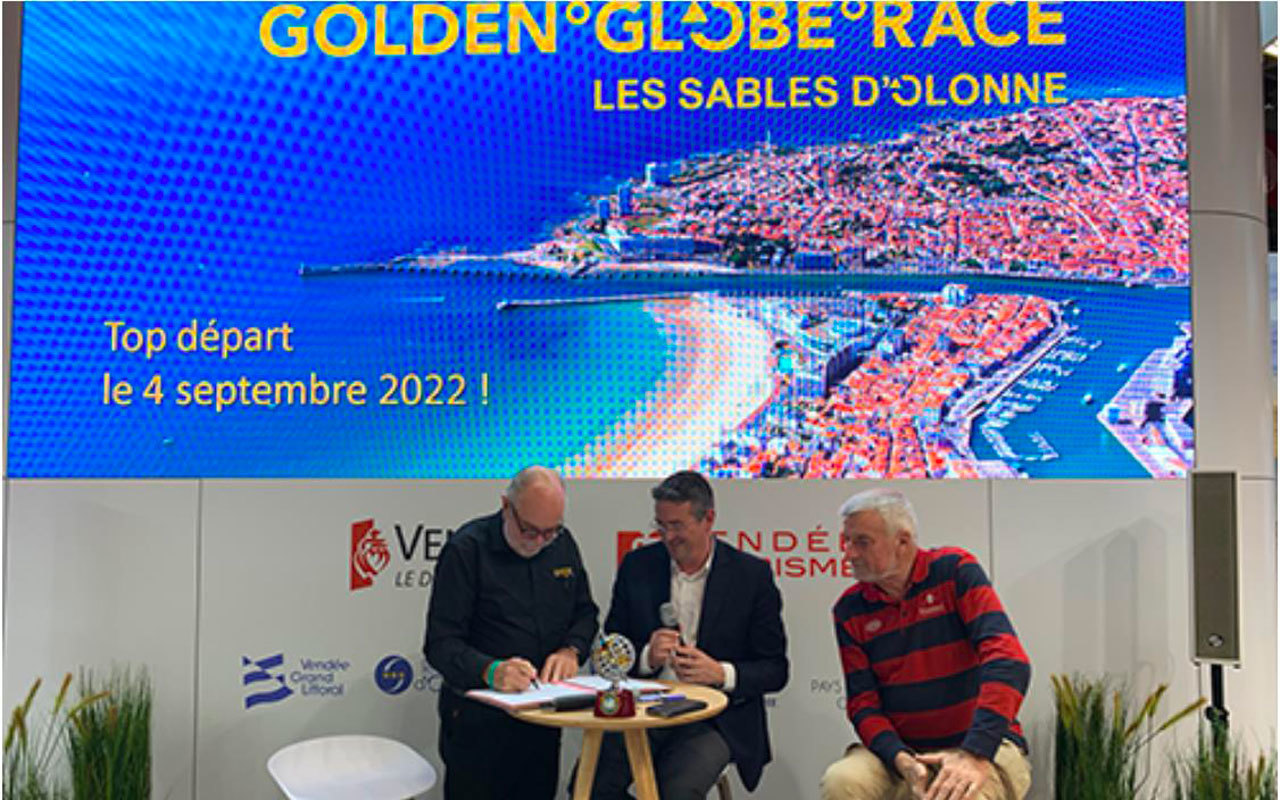 The Golden Globe Race delivers this rare alchemy: be an event of international scope and keep a family and fraternal spirit. This duality gives a unique personality to this old-school round-the-world race where the sailors' human qualities take precedence over technology. After the success of the first edition, returning for a new challenge was almost an evidence.


The Paris Boat Show is the traditional meeting place for all sailors. It is here that we rewrite the epic tales of the past year and imagine the beautiful adventures to come. What better place to officialise the partnership that will associate Don McIntyre, the town hall and the urban community of Les Sables d'Olonne for the Golden Globe Race 2022? On Wednesday, December 11, the main personalities of 2018 met to lay the foundations for the next edition. Several 2022 competitors were able to exchange with Jean-Luc Van Den Heede, the brilliant winner of 2018. With the enthusiasm already generated by the race, there is confidence the next edition will meet expectations from racers and audiences alike.

Jean-Luc Van Den Heede, winner of the Golden Globe Race 2018:
"I had great pleasure on this race. My only regret is that more competitors could not cross the finish line, but I am convinced that the next edition will be a great success and the 2018 experience will serve everyone. There is already a real enthusiasm for the event. I am also sending a message to my French skipper friends: hurry up and register: entries are likely to be scarce in a very short time! »

Don McIntyre, organizer of the Golden Globe Race:
"What a pleasure to see the enthusiasm of the City of Les Sables d'Olonne to join the 2022 edition of the Golden Globe Race as an official port and logistics partner. We will continue in the tradition of the relationship of trust that was created during the 2018 edition. This adventure has been a success at all levels; it was also the bearer of true human relationships. This event is more than a race: it is the longest, slowest and most committed individual challenge, of all sports combined. There is no better homeport than Les Sables d'Olonne. With 25 candidates from 11 different nationalities, we are expecting the most exciting event of 2022. »

Click to open the video presentation of the Golden Globe Race