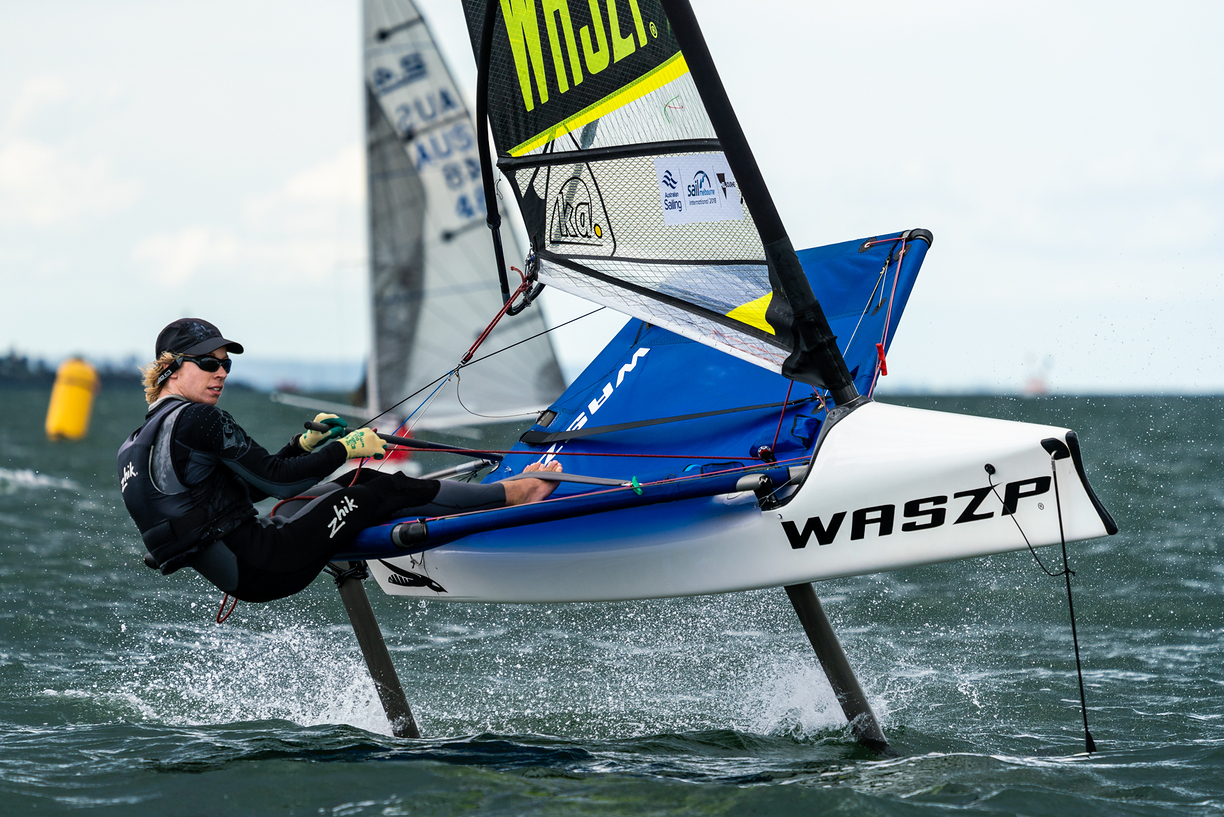 Sail Melbourne International 2018 wraps up with full day of Racing

Racing at Sail Melbourne International 2018 wrapped up with a full final day of racing across all Olympic and Invited class fleets. After challenging race disruptions over the four-day event, caused by the current weather system sitting over Australia's east coast, it was a welcome finish for the close to 400 competitors from all across Australia and from 18 countries.

One and half years out from the Tokyo 2020 Olympic Games Australian Sailing Team sailors presented themselves in strong form on home waters and took home the wins across most of the Olympic classes.

Australian Sailing Team's Rio 2016 Olympic silver medallists Mat Belcher (QLD) and Will Ryan (NSW) continued their winning series on home waters and took home the win in the 470 class at Sail Melbourne. The pair won all but one race of the seven race series ahead of the two boats from Japan with Daichi Takayama and Kimihiko Imamura in second and Kazuto Doi and Naoya Kimura in third.

"The racing was pretty close and pretty tricky out there with some really big shifts and challenges for the race committee, but we had two first and one third and it's been a great competition all week," Belcher said.

And looking ahead he added, "It's definitely getting closer to the games and the pressure starts to come in a bit more, the training increases and we are getting excited and are all looking towards Tokyo, but at the moment I'm just looking forward to spending a little of time with the family and having a nice Christmas."

The 470 fleet was one of the most competitive fleets including sailors from seven countries and featuring Spanish 2018 World Championships bronze medallists Jordi Xammar Hernandez and Nicolás Rodrigues Garcí-Paz, who finished fifth, behind Germans Simon Diesch and Phillip Autenrieth in fourth.

It was a challenging regatta for the lasers, who only managed to get three races in over the first two race days. Rio 2016 bronze medallist Meech led the fleet going into the final day with Wearn making the most of his opportunities and securing the overall win over the last three races posting a third and first and dropping a seventh place.

"The schedule today was to get three races in, so basically half a regatta in one day and we had three really tricky ones. But I managed to win the last race to squeeze into the lead and take out the regatta. I'm pretty happy with how things went this week," Wearn said.

"It's been good that the Kiwi boys came across, who gave us a bit of a run for our money. We've also had Lorenzo from Britain, a couple of Italians and Dutch here, so it was great to have some high-quality sailors here. It's good to get those guys down and give us some more people to race against and get ready for Europe next year," Wearn added about the welcome international competition.

2019 will also be a big year for Australian Sailing Team's Rio Olympian Jake Lilley (QLD), who finished second in a stellar Finn fleet. Lilley posted a second and seventh and dropped a 12th on the final day to hold on to his second place. The Olympic Finn class was one of hottest contested fleets of the regatta with the best of the best in Finn sailing making the most of the opportunity to test the Port Phillip waters ahead of Melbourne and Royal Brighton Yacht Club hosting the Finn Gold Cup, the World Championships of the Finn fleet in December 2019.

"The forecast didn't look great but thankfully we've had some awesome racing and got three good races in. We are here to learn about the venue for the Gold Cup next year and to race this fleet is just great. It's a bunch of legends with two America's cup winners, Olympic champion, former Laser and Finn World Champion, so to finish anywhere in the top ten is a good week and I'm happy to finish second," Lilley said.

Current World #1 and winner of Sail Sydney Nicholas Heiner (NED), who won the first two races of the regatta on Thursday, managed to hold on to his lead, despite an average final day posting a tenth (drop), third and eighth.

"We did enough to win. I didn't have the best day, but luckily, I had a bit of a margin. This week has been a bit crazy weatherwise, but I have been here before and in general there are great waves, good sailing and I'm looking forward to next year's Gold Cup," Heiner said.

In other Olympic class results, Australian Sailing Teams David Gilmour (WA) won the 49er together with his brother and Australian Sailing Squad sailor Lachlan Gilmour. The pair had a strong race series with three wins, two second and two third places over the two days of racing for the 49er fleet. Jim Colley (NSW) and Shaun Connor (NSW) finished second.

"I think Melbourne has really outdone itself this week, but today the wind came in. We're really happy about how we went and we are hoping we will be able to step it up again. We've been training and working hard and hopefully will see some improvements from that when we head overseas next year," Jaime Ryan said.

Port Phillip will be hosting the 49er/FX/Nacra17 World Championships out of Geelong Royal Yacht Club in February 2020 and local Victorian Tess Lloyd is already looking forward to more international events on her home turf.

"It's been really exciting with all of the people from overseas here and I'm looking forward to our worlds. They are a long way away and we have a lot of work to do in-between now and then, but I think we are just taking the right steps at the moment and we are definitely improving together as a team," Lloyd said.

The Nacra17 was one of the few fleets that got ten races in and Victorians Tayla Rietman and Lachlan White made the most of it with five race wins and winning the class ahead of Jake Liddell (NSW) and Emma Jones (NSW) in second and Queenslanders James Fraser and Olivia Jozefowski in third. These three boats also took out the podium in the Australian Nacra Championships with Sail Sydney and Sail Melbourne results counting towards the nationals' win.

The WASZP foiler-class was a new addition to this year's race program in the invited classes and Victorian Jack Felsenthal took home the win in the first time Sail Melbourne event.

"Today was really good. We started off with probably 10 to 15 knots and were up on the foils most of the time. Sitting on 15knots, the boats are at their best and it was a great race. We have our worlds in Perth in a month time and it's really exciting to see the enthusiasm for the class and it was great to win the first-time event at Sail Melbourne," Felsenthal said.

Sail Melbourne International offers a great opportunity for Australia's up and coming sailors to mix it up with their Olympic sailing heroes on the Port Phillip race-track and the Invited classes at Sail Melbourne International once again attracted a large number of youth sailors. The regatta was also the last opportunity for youth sailors to test their skills ahead of the 2019 Australian Sailing Youth Championships in Tasmania in January.

The 29er class was won by Archi Cropley (NSW) and Max Paul (NSW), who had two race wins over the seven races series sailed over two days. Tasmanians William Wallis and Fynn Sprott as well as Ethan Galbraith and Charles Zeeman finished second and third respectively and will be looking for a rematch on home waters in January.

"We had a few up and down results wise, but we are happy to still come away with the win. Our boat handling was probably the biggest thing we wanted to work on this week and we've made that a bit better, so we're happy," Archi Cropley said.

"We only sailed two days, but learnt a lot of lessons this week and did a good job and won the regatta which is great. We're heading to Tasmania next for our youth nationals in January and Sail Melbourne has been a perfect event to tune up and get ready for next year," Max Paul added.

NSW sailor Brooke Wilson impressed in the Laser 4.7 and won the mixed-fleet with three race wins across the five races.

"It was a pretty challenging day and the top half of the fleet was pretty close and challenging but lots of fun. I'll be heading to Tassie for the Youth Nationals next and looking forward to that," Wilson said.

In other youth class events, Will Cooley and Bec Hancock (NSW) took home the win in the Nacra15 ahead of Western AustraliansShannon Dalton and Will Drew in second and Tom Dawson and Sarah Hoffman (NSW) in third.

The mixed fleet of the 420 class was won by Cole Tapper (NSW) and Tyler Creevey (NSW). Victorians Sophie Jackson and Chloe Harper finished overall fourth and were the top female boat.

The Optimist Open fleet was won by Daniel Links (NSW), while Queenslander Will Nobes (QLD) took home the win in the Optimist Intermediate. Victorian Roger Blasse won the OK Dinghy

"The 2018 Sail Melbourne International has come and gone this year and we are pleased to say that this year attracted some amazing sailors across 20+ class and 18 Nations represented. With the build-up in full swing for the 2020 Sail Melbourne Summer of Sailing and a critical hit out leading into Tokyo 2020, we have seen multiple Olympic and World Champions across many classes and we have invited them all back for next year's World Championships," event director Mark Turnbull, OAM wrapped up the event.

"And as always, the junior and youth classes are critical to Sail Melbourne and it was great to see so many future champions compete alongside their Olympic heroes. The weather has made this a difficult week for sailors and Race Management alike, but we thank our tireless volunteers for all the work they have put in. Without their support, large regattas like this are not possible. Congratulations again to the winners and we are looking forward to seeing you all back next year for the 2020 Sail Melbourne Summer of Sailing."

Sail Melbourne is Australia's premier Olympic and Invited Classes Regattas, held annually in the waters of Port Phillip, Victoria and is the largest annual 'Off the Beach' regatta in the southern hemisphere. The regatta has attracted the best of the best in the Olympic, para-sailing and Youth classes.

Less than two years out from the Tokyo 2020 Olympic Games and with Victoria hosting a series of the World Sailing Olympic qualifying regattas next "2020 Summer of Sailing", Sail Melbourne International is a welcome opportunity for domestic and international sailors alike to test Port Phillip's waters.