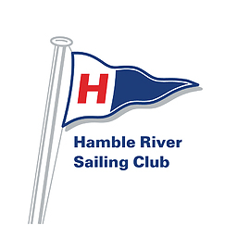 As the oldest surviving sailing club in the village Hamble River Sailing Club was originally founded in August 1919 by a group of seven Hamble men “to encourage the sport of small boat sailing and racing”. They were determined that the club would provide sailing opportunities for all those who lived and worked in all the parishes along the banks of the Hamble River. This included the many men who worked on the yachts as paid hands and were considered as professional sailors and therefore excluded from participating in many sailing races.

At first there was no clubhouse just a wooden storage hut in the kitchen garden of the “Bugle Inn”. Apres-sail was held in Quay House, home of founder member Gregory Robinson, and now part of the Royal Southern Y. C. clubhouse. Races were held throughout each summer on Wednesday evenings and Saturday afternoons, a tradition that is still kept today. The first handicap system recorded shows the winners were given a time penalty in their next race. Prize money was awarded and this was deducted from the race fees at the end of the season. The most successful helmsmen sometimes ended the season a pound or two richer.

In 1928 the wooden shed was replaced with a small clubhouse and in 1931 Capt. Maurice Nelson, a descendent of the Admiral, succeeded the first Commodore, the famous sailor and author Capt. Basil Lubbock M.C. On the water the club was always at the forefront, supporting new classes and ideas. The “X” one-design class established a fleet at Hamble in 1928 and this year celebrates 75 years of racing at the club.

The club activities were suspended during the Second World War. Then, in 1947, the lease on the “Bugle” clubhouse expired and it was only through the kindness of Charles Nicholson, in making the present site available, that the club was able to continue. That first season the club assets were a flagpole and the flags to run the racing. Race Officers wore Wellington boots to keep dry during high tide races. With regular building improvements, new training room and new changing room facilities the clubhouse offers itself to every kind of function and can be hired out to members at reasonable rates.

The popularity of dinghy sailing accelerated during the late 50’s and the list of club members and their sailing achievements over the next twenty years made the club one of the premier sailing clubs in the U.K. Many of today’s leading yacht designers, mast manufacturers and sail-makers learnt their skills in the dinghy classes at Hamble River S. C. This era reached a peak in 1972 when six of the 13-man Great Britain Olympic sailing team were Hamble River members and they brought back a Gold and Silver medal.

During the past twenty years yachts have become more affordable and this increasing popularity has meant that the river has become ever more crowded. The result of this and other factors has seen the club expand to include yachts as well as dinghies. Perhaps the greatest single advance has been the development of the Hamble Winter Series. Started in the early 80’s as an end of season club event this has now grown into the premier Autumnal series in the U.K. calendar.

A major sponsorship drive over the past few years has seen the arrival of 3 new Fevas & 2 RS Vision dinghies for club use. A grant from the Flagstaff Trust will enable the club to provide a number of sailing schools this season for the club’s cadets. As a result of these initiatives there is a regular programme of youth sailing and racing planned for the coming season.

Today’s membership enjoy the comforts of a pleasant clubhouse with modern facilities, have regular club racing with the chance to compete with the best at special events and include a growing band of youngsters who want to participate in dinghy sailing. The Founders’ aims to promote sailing to all are still very important and valid.

If you would like to find out more about our activities then please ring 02380 452070 or email admin@hrsc.org.uk or, best of all, come in and see us! The club office is open Monday- Friday 09:30 – 16:00. The Bar is open on Friday evenings and Sunday lunchtimes during the winter. During the summer the club is also open on Wednesday evenings for club racing and at the weekend.