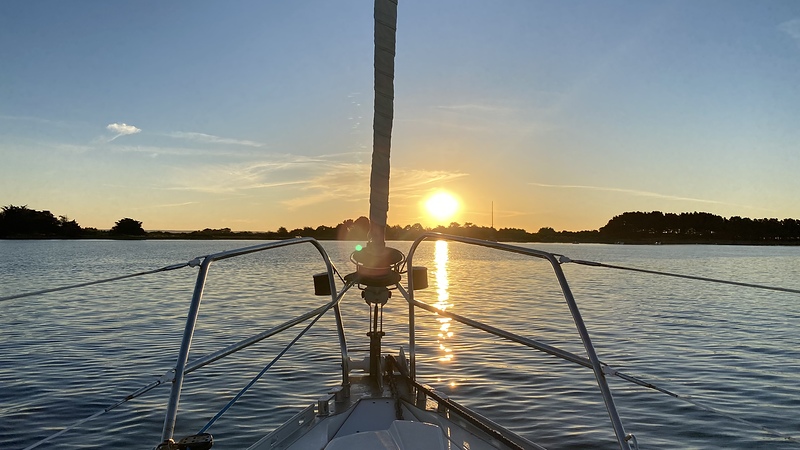 Idyllic though our anchorage at the Île d’Arz was, we wanted to take our son out for dinner on his birthday so needed to be somewhere with a bit more infrastructure for the night. We had heard good things about Michelin-recommended Le Goeland in Le Palais, the capital of Belle-Île, and also liked the idea of heading out of the sheltered Morbihan in the soaring heatwave.

Sadly, our first choice of restaurant was closed on Tuesdays but, as a busy port town, Le Palais seemed to have a wealth of venues to choose from so we set sail and, after further research, I booked a table at TripAdvisor favourite La Parenthese with my very patchy French (and a very patient maitre’d on the other end of the phone). We enjoyed a speedy sail across Quiberon Bay before the wind died half-way to our destination. With a birthday dinner to get to, we reluctantly switched on the engine and chugged across to Belle-Ile.

Entrance to Le Palais’ marina and basin is only open at High Water +/-1.5 hrs, via a lifting bridge operated by the harbour-master. After loitering at the harbour entrance with a clutch of other keen yachts, we were herded in by port staff whizzing cheerily between us on their RIBs. Following a steady trail of boats through the inner harbour, we had plenty of time to soak up the sights of Le Palais – which is dominated by an impressive star-shaped citadel designed by Vauban in the 17th century to be impenetrable (spoiler alert: it wasn’t).

We were allocated a pontoon berth just inside the Bassin de la Saline, which seemed a pleasant enough position until Skipper clocked the sign on the shoreside bar opposite us stating its opening hours of 6pm-2am. Surely there wouldn’t be many people partying until the wee small hours on a Tuesday evening in Le Palais, would there? Interestingly, we were the only yacht not rafted – all the other boats further down the Bassin were rafted three boats abreast, on both sides of the basin. Perhaps there was some advantage to being further away?

After refreshing Dark & Stormies on board, we all enjoyed a superb dinner at La Parenthese – sea bass ceviche, tuna tartare and steak frites prepared with subtle Thai flavours and the freshest of ingredients. The birthday boy managed to polish off a crème brûlée for dessert, then we headed back to Exeat…noting the late-opening bar Le Cafe de la Rade was filling up, but not (yet) too noisy. By midnight it was getting into its stride, and the music and revelries continued to the dot of 2am. You have to hand it to these Belle-Islanders, they certainly know how to enjoy themselves on a Tuesday night in a heatwave! But perhaps next time we stop at Le Palais, we might just ask for a different berth… 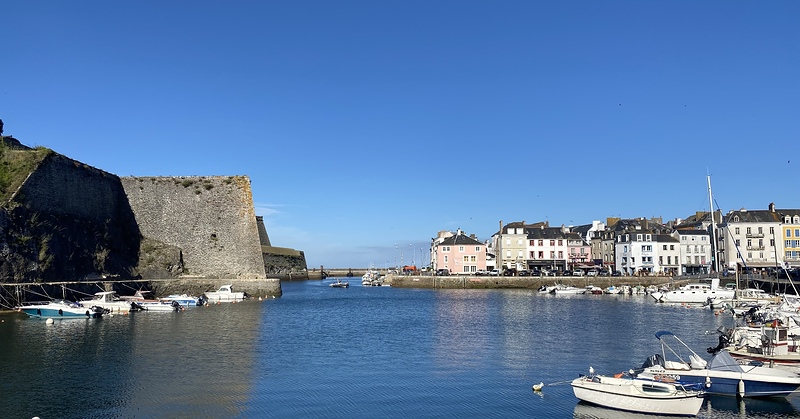