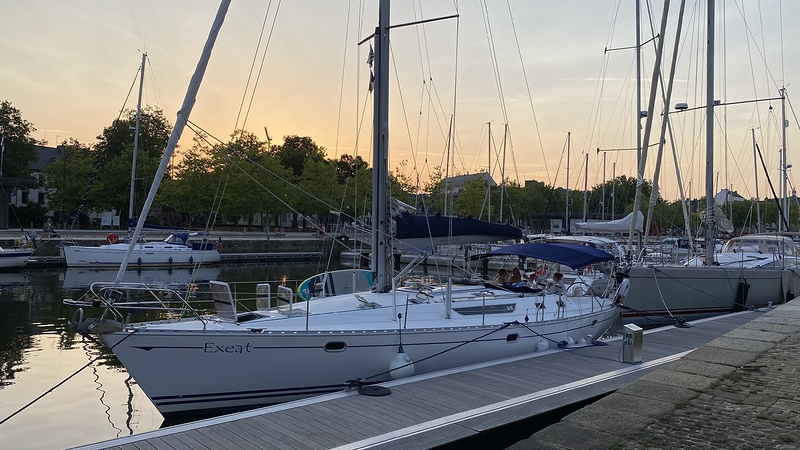 Exeat back in Vannes

It’s always delightful to be in Vannes, even in an extreme heatwave. Luckily the swing bridge and lock gate opened early that morning (you can check times on the port’s website), so we were in the marina by 11.30am. While the teens had the first of many showers that day, Jerry and I dashed into town while the heat was just about bearable to buy supplies. Although many independent shops (such as the poissonerie, butcher, Nicolas off-license and most stalls in the Halles Des Lices) in Vannes are closed on Mondays, the local Casino store is open, and a few bakeries – notably the famed Francoise. At least we now had water and Kouign-Amann!

The afternoon passed slowly and torturously trying to keep Exeat cool and shady as the mercury climbed to 43 C, and the slight breeze had little effect in fanning us. The usually brilliant French train network was also struggling in the insane heat, and our friend’s train from Paris was delayed, then cancelled, then rescheduled to 9pm. We were glad to have made the decision to stay in Vannes for the night, rather than rely on the bateaux-bus in and out of the Morbihan (with the last one to the île d’Arz leaving Vannes at 19.45)

At 6.30pm, having eaten little but chilled watermelon all afternoon, we ventured out to buy ice-cream and walk Buddy through the public gardens bordering Vannes’ medieval ramparts. The sight of this lush expanse of grass, dotted with ornately planted flowerbeds, made us all feel fractionally cooler, and we leant gratefully against the ancient stone walls to finish our ice-creams. Our friend’s train from Paris eventually arrived just before midnight, when the temperature was still a balmy 29 C.

The following morning, we bid Au revoir once more to Vannes, and headed out into the Golfe du Morbihan, hoping to sail on to the Île d’Houat. But as we reached the mouth of the Morbihan, the wind picked up, and the sea state became far rougher. Conditions out in Quiberon Bay would be amplified yet again, which we knew would not make for very teen-friendly sailing. Skipper turned Exeat around and we anchored on the sheltered eastern side of Île-aux-Moines, where the teenagers happily swum all evening, explored the shoreline, and ate local oysters (no doubt from the very oyster beds opposite our anchorage!). 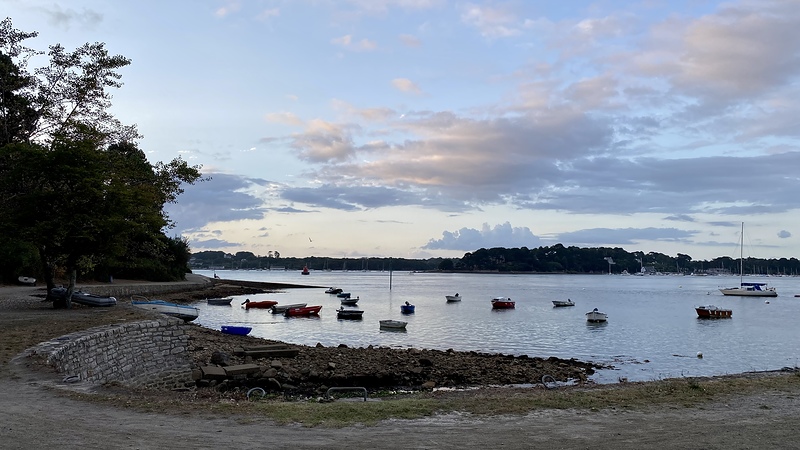