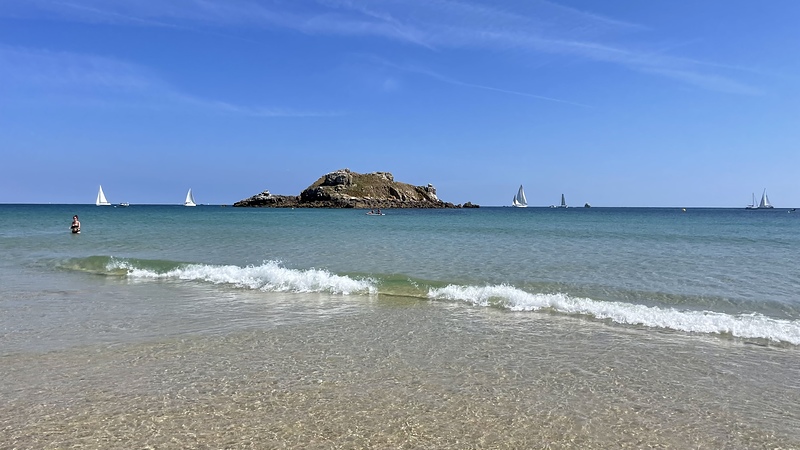 The anchorage at Treac’h er Goured on the eastern edge of Houat was busier than ever (now that we were in the middle of the summer holidays) but no less lovely. Buddy was in raptures at being able to run the length of the glittering white beach, and the teens spent the afternoon diving and swimming off the boat. After a barbecue of some excellent lamb kebabs from the butcher in Vannes, we settled down to sleep…only to be woken at 2am by the boat rocking and rolling in some very heavy swells. A northerly wind had blown in during the night, and was due to pick up further the following evening with gusts of 30 knots forecast. After a restless night, we raised the anchor at first light and decided to make for the shelter of the Vilaine river.

When we reached the lock gate in the Vilaine, we realised we weren’t the only ones with this idea – the gate entrance was crammed with yachts and motorboats all jostling to get through when the gate next opened at 2pm. We tied Exeat alongside a holding pontoon, and waited for instructions from the harbour-master. As the different vessels threw lines round chains on the lock walls to keep them in some sort of secure formation, we were beckoned over to join the throng. It was all hands on deck (in lifejackets, as per the Capitain’s orders) to move fenders where they were needed, throw lines, and gently steer Exeat into the tightly-packed bundle of boats. Then the lock gates were closed and the water level raised. Our son was fascinated by the mechanics behind it all, and watched with interest as the boats were lifted up by the rising water, and released when the lock gate at the other end opened. Eventually we were out the other side, and sailed in short tacks up the Vilaine to La Roche-Bernard. 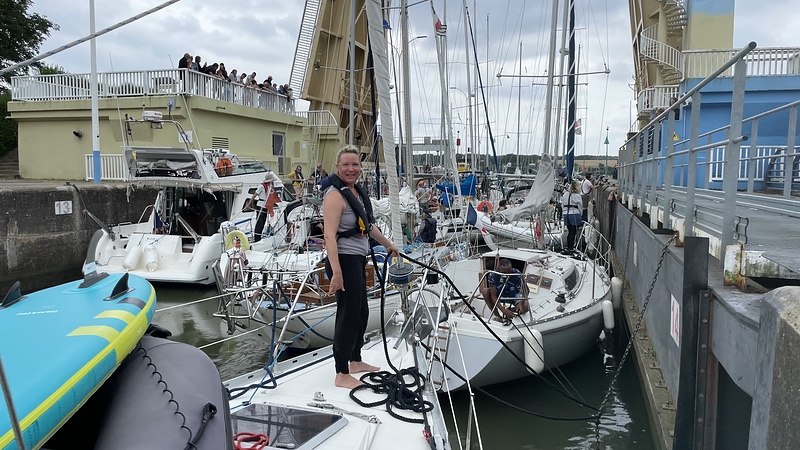 The busy lock gate into the Vilaine
+ Add comment...