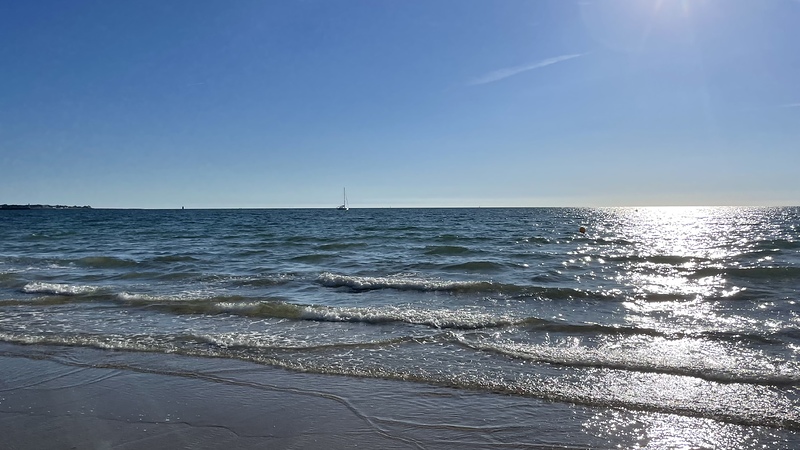 We needed to get our daughter’s friend to a train station for Monday morning, and Pornichet seemed to be the best option from our anchorage near Le Croisic. It was a few hours sail along our route south, had a marina that could hold 1000 boats, and the train station had direct trains to Nantes (from where you can either fly from Nantes airport, or catch fast trains to Paris and, from there, the Eurostar). In retrospect, its proximity to a station may be the only thing to really commend it.

Port de Pornichet is at the far end of the Baie du Pouliguen, whose wraparound sandy beach is flanked by a heavily-developed seafront. Blocks of flats (hotels presumably) span the shoreline as far as the eye can see – somewhat of a shock to us after all the deserted beaches we’d been anchoring at for the past few weeks.

Pornichet’s marina – though large, with well-maintained pontoons and dockside power and water – had slightly disappointing facilities (particularly when an overnight berth in High Season costs 58 euros). The teens had been longing for “proper” showers but found the unisex shower block fairly basic, and certainly little improvement on the boat heads. A minor annoyance for us was the feature on the pontoon power supplies of a green button that times-out after a few hours, requiring you to actively go and switch it on again to keep the electricity flowing. A greater disaster was the total absence of laundry facilities – highly unusual in a marina of this size. (The nearest option is the Laverie du Marché launderette in the town square, fifteen minutes walk away – but fellow users: do note you can only pay in cash). And the final disappointment was not being able to get hold of any ice – either from the Capitain or any of the town’s supermarkets (a Spar, Casino and, further out, an Intermarché). Quel horreur! With a broken fridge and daily temperatures in the high twenties, we were restricted in what fresh food we could store on board until we could stock up with ice again, which meant shopping for things like milk, cheese, meat and fish on a daily basis.

We decided to raise crew morale with dinner out. One thing the marina does have in good supply is a number of lively restaurants and bars. We plumped for Le Ponant, which seemed to have a wide variety of dishes that would hopefully suit all five members of our party but wouldn’t break the bank. It proved a safe choice, and between us we dined on moules frites, steak, baked cod and a chicken burger, followed by the fabulously French desserts of chocolate fondant, crème brûlée, and my new discovery of Cafe Gourmand – a shot of coffee surrounded by four or five miniature desserts, which I shared out. While we ate, we watched the antics of a hapless yacht trying to berth in the tightly packed marina without an operational engine and in full sail; we may have a broken fridge and non-functioning generator, but we could count our blessings that at least Exeat was safely docked and we had nothing more to do for now than relax in each other’s company and enjoy the sun setting on this balmy evening. 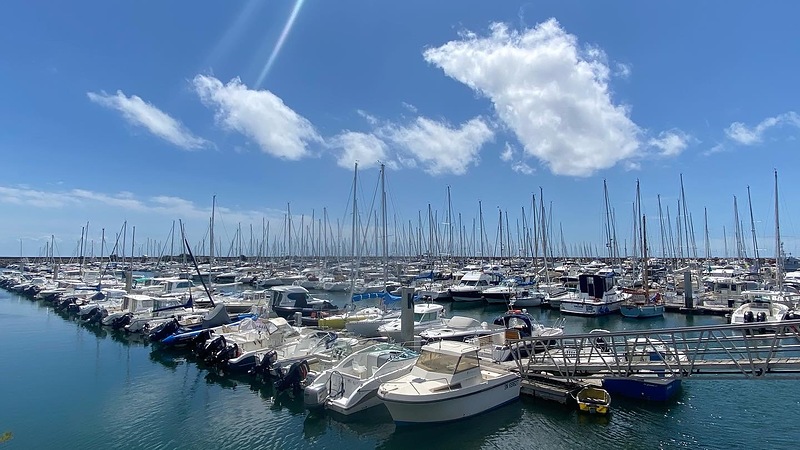 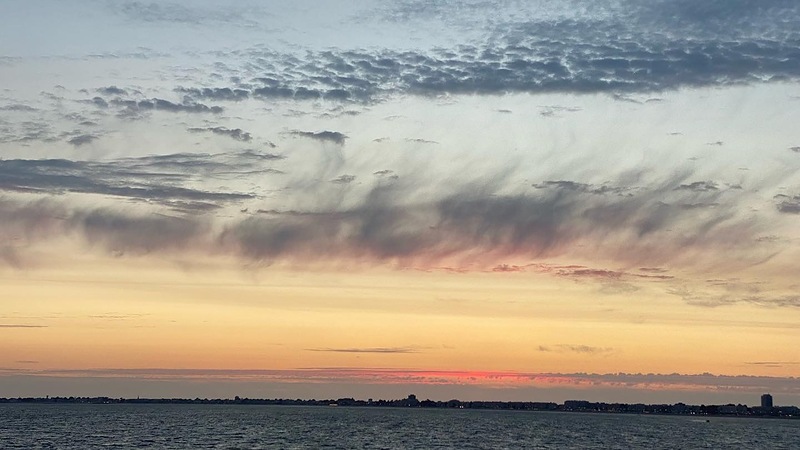