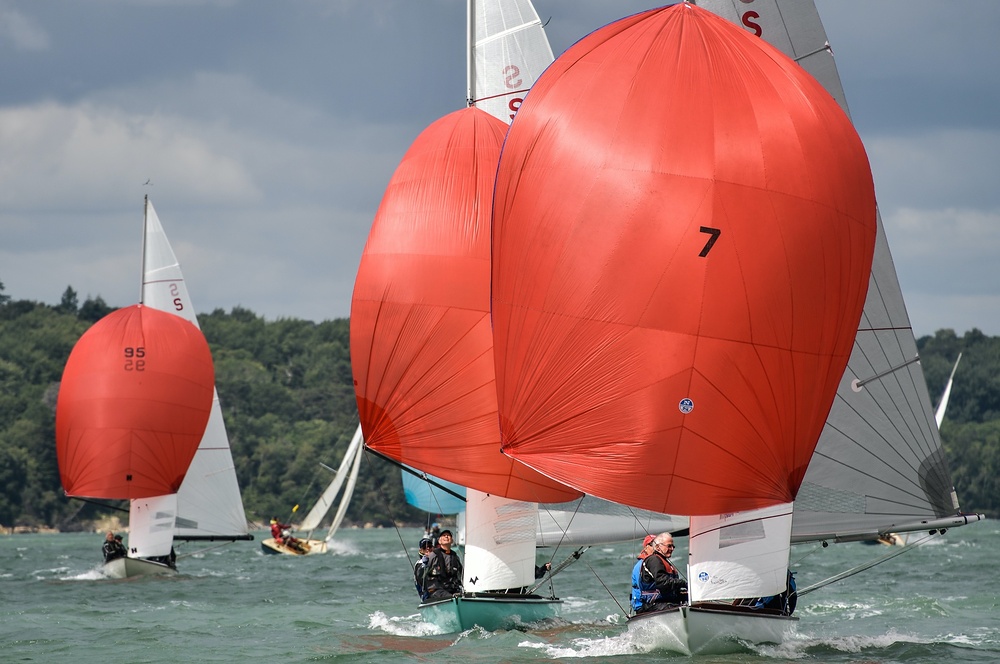 A cracking stiff breeze opened the third day of Cowes Classics Week with welcomed starts for the one design and cruiser classes after yesterday's gale-enforced postponement. Wind over tide with gusts building up to 28 knots in parts of the race area by lunchtime characterised the challenges of the day.

One group which managed to find relatively peaceful conditions away from the bumpy mid-Solent was the committee boat race area for the Swallows, Vintage Dragons, Flying Fifteens and Bembridge One Designs, sponsored by Robert Oatley Wines. Even so the race team's course setter Matt Cowan explains "We had around 12 knots of breeze at the committee boat and just under a mile up the race course to the west it was blowing more like 20 knots."

Like all the entries in Cowes Classics Week each of these classes boast a classic heritage with the 15 strong Swallow class originating as a two-man Olympic class for the 1948 Olympics but now sailed with three crew. The class has developed into a thoroughly modern classic as demonstrated by the competition on the water. Mike Wigmore in Gwaihir showed that he was coming back to defend his previous 2017 and 2018 titles when he added todays' three races to his first position of Monday to keep him ahead. Harry Roome in Skua was today's scratch boat, with two wins but a no-show for the final race.

The Bembridge One Design, a smaller but equally graceful boat, shared the same race area. Slower that the Swallows and without spinnakers these hardy little yachts relished the courses even in the gusts. 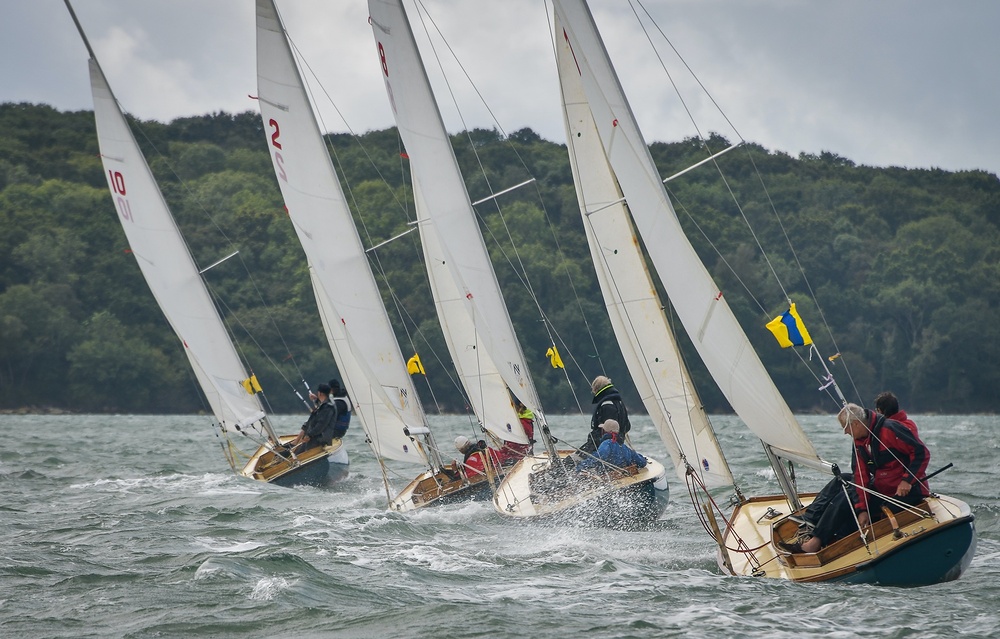 Matt Cowan continued "We had all the classes on the same circuit, so we set trapezoid courses to create some separation between them. By giving the BODs two rounds and the Swallows one we were able to get all the fleets to finish pretty much together, so that we could get the second and third races underway promptly. We had to adjust for a 20 degree wind shift between the first two races when the wind went south."

Taking up the story was Nigel Glennie, sailing Swallow Migrant. "We actually saw 30 knot gusts," he said. "It was an extremely wet day. It was getting tough by the time we started the third race and several of our fellow competitors decided to call it a day. However, Matt very sensibly decided to set the final race in the homeward direction, using fixed Solent marks."

The Bembridge One Designs were also able to get three races in. The strict one design fleet, which is resident at Bembridge Sailing Club is a close relative of the Alfred Westmacott designed XOD, both over 100 years old. Hugh Doherty sailed BOD10 into the lead today with a 1,2,3 with wins also going to last year's BOD Champion Russ Fowler inBOD1 and Charles Able-Smith in BOD7. 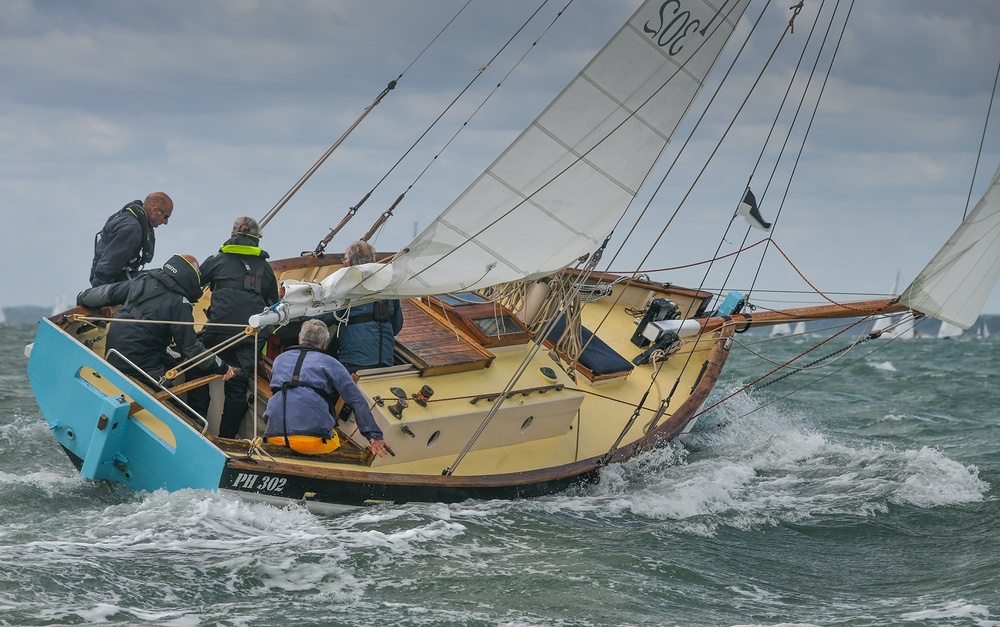 Further north towards the mainland shore conditions were even more lively. The XOD fleet, the largest in the event, with 37 entries, was dominated by Roger Yeoman sailing Xcitation, finishing today one point ahead of another previous Cowes Classics Week champion Max Crowe with Clair de Lune. Race Officer Bob Milner had his fair share of planning to do. "We had to postpone the first start while we took the committee boat to calmer waters. It was wet racing for our fleet and there were a number of retirements. After the second race it was time to call it a wrap for the day so the fleet could get back into the shelter of Cowes."

The cruiser classes, which start from the shoreline of the organising club, the Royal London Yacht Club, also had their work cut out. Stuart Watson, who was sailing the winning Folkboat Crackerjack with his wife Caroline commented "It was very wet today!"

The Folkboats, along with the Classic Cruisers and Gaffers raced in the mid Solent around fixed racing marks. "We had to be mindful of the wind against the ebbing tide , which was creating some big seas, so we tried to keep the windward leewards along a line of the south edge of Bramble Bank to get some calmer water." Class One embraced a long beat eastwards with the smaller classes racing inside their course.

Amongst these were the Gaffers including Spinaway X , here for her third year with owners Angela and Andrew Hitt. Spinaway X is the oldest yacht in the fleet. Originally built as a west country fishing boat, as the name of her design, a Plymouth Hooker, aptly describes her, Spinaway X was built in 1889 and has been well cared for through her career. "Her previous two owners were both boat builders," explained Andrew. The Hitts who previously sailed their classic Helmie here at Cowes Classics Week, decided to bring Spinaway X to the event once they had bought her. "The Week is good for Gaffers," says Andrew. The Race officers understand that Gaffers don't want to thrash too hard to windward and give us the right courses."

Racing continues tomorrow and Friday. The Darings, Vintage Dragons, and a host of other boats, all of whom are designs of more than 50 years old, will be on the start lines along with a others including Twisters, Contessa 26s and, for one day only, the Seaview Mermaid fleet will take part.

Red Funnel is Signature Sponsor of Cowes Classics Week and live coverage from on the water comes courtesy of Cowes Radio 87.9fm.

The busy social calendar includes the Winkworth Tea and Cakes which are held after racing each afternoon at the Royal London Yacht Club. The Cowes Corinthian YC and the Island Sailing Club are helping on the water.
Racing finishes on 2nd August 2019. More information at www.cowesclassicsweek.org.