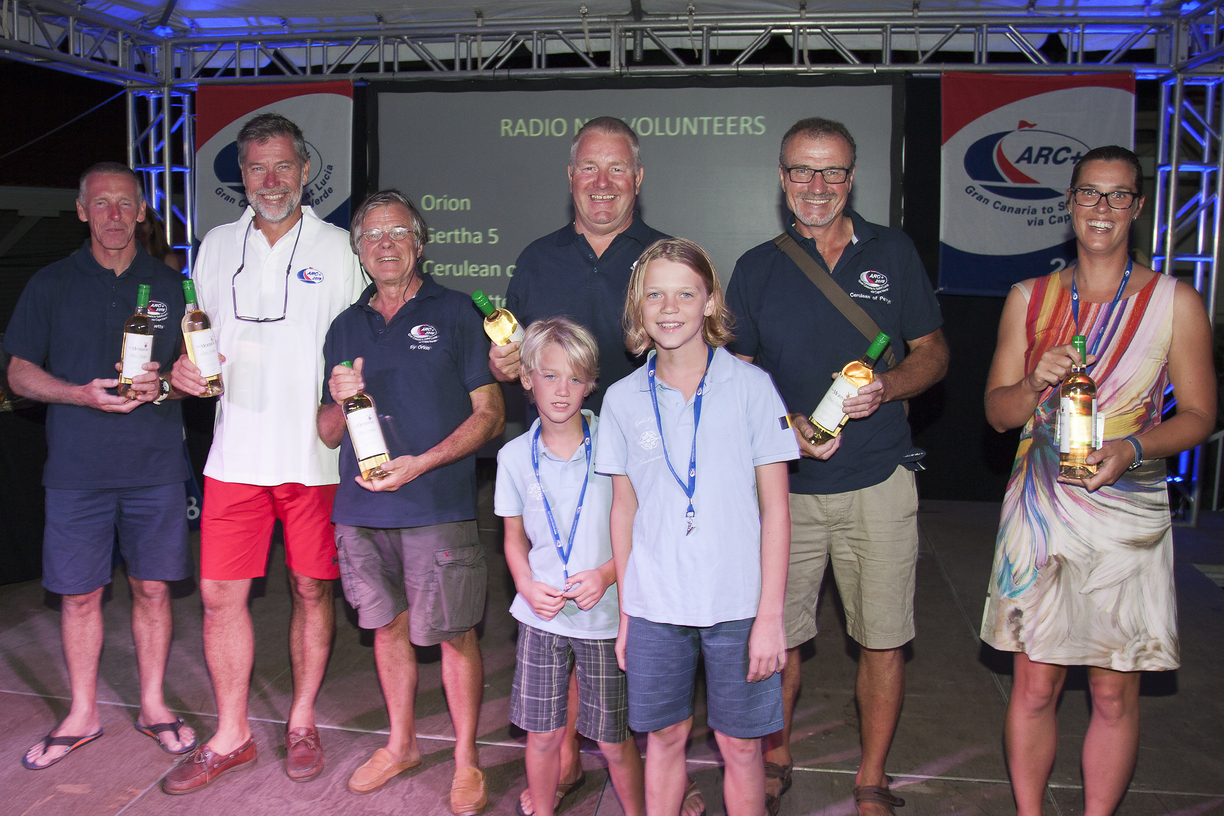 In Rodney Bay, Saint Lucia last night crews from ARC+ route of the Atlantic Rally for Cruisers gathered on the green of IGY Marina to mark the end of their Atlantic adventure that began in Las Palmas de Gran Canaria on the eastern side of the Atlantic six weeks ago. The Prizegiving Ceremony provided the chance to recognise the achievements of their ocean crossing, and the ambience of the evening reflected a large family party, everyone knowing each other so well within the 72 boat fleet.

Their journey began some six weeks ago in Las Palmas de Gran Canaria where the crews of yachts from 22 different nations assembled and a special community has developed ever since. The pre-departure programme brought together the fleet for seminars, safety demonstrations and final preparations before setting off on Sunday 11th November. The rally sailed first to Mindelo, Cape Verde, filling the marina with a special buzz as continual arrivals greeted one another with great enthusiasm following the 850nm passage. The passage took between 5 and 7 days for the fleet, and along the way they enjoyed plenty of special ocean sailing moments of starry nights, playful dolphins, fishing triumphs and riding the rolling waves as the miles to Mindelo counted down. Putting the 'plus' in the ARC+ name, the stopover included days ashore to explore the delights of Mindelo town, and the neighbouring island of Santo Antao.All too soon for some, it was time for the ARC+ fleet to continue across the Atlantic Ocean on to their Caribbean destination of Saint Lucia. Fine, consistent trade winds since their departure from Mindelo on Leg 2 of their crossing have meant all ARC+ boats have arrived in good time for the evening's ceremony, with a steady steam rolling into Rodney Bay since the 1At the Prizegiving Ceremony those visiting the stage to collect their prizes included Class and Division winners Skyfall 1 as the 1st

As is traditional in the ARC too, it was not just crews who were successful in the competitive side of the rally who received prizes; there were many other awards given out for happenings at sea, successes and achievements as well as recognising the families and double-handed crews who took part in this adventure. The last participants to be called to the stage were Karl Stratmann and Peter Heinz Jeschke, the double-handed crew of Orion, collecting the coveted Spirit of ARC+ Award. A familiar face to World Cruising Club rallies, Karl has assisted fellow crews throughout the rally, particularly with advice on operating SSB radios and acting as a Net Controller. As a doctor himself, Karl also provided medical assistance and advice when needed and he and Peter have been enthusiastically involved with the social and practical sides of the rally. It was an emotional moment as he collected the award, thanking the World Cruising Club team.

As the ARC+ Prizegiving Ceremony concluded, the bars were open and ARC participants joined the party. With over 80 yachts and almost 500 participants from the ARC wave sailing directly from Las Palmas now in Rodney Bay, the green was soon buzzing as the music began. Children from the rally did not need much encouragement to return to the stage to show off their dance moves, followed by local entertainment of colourful Lucian dancers wowing the crowds.

Whilst the evening may have marked an end to ARC+ for another year, the camaraderie of the rally is set to continue as crews keep in touch and explore the Caribbean together. The majority of the fleet will leave Rodney Bay today, their spaces soon filled with the incoming wave of ARC arrivals. IGY Rodney Bay Marina, the Saint Lucia Tourism Authority and the Events Company Saint Lucia continue to give an exceptional Caribbean welcome to each crew completing the crossing with plenty more fun to come in beautiful Saint Lucia.